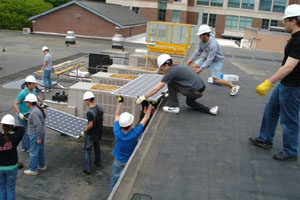 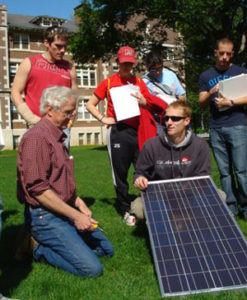 In addition to the MAREA PV installation workshop led by executive director Bill Hennessy, students at the Allentown college performed energy audits at two campus buildings. The group received guidance for the audits from MAREA board member Phil Jones, a mechanical engineer with EMS Environmental of Bethlehem. In his thorough presentation, Jones emphasized that conservation and efficiency are the foundation for effective solar installations.

The students produced professional quality electrical work in a timely manner under the guidance of Jesse Waters, the electrician-owner of EcoElectric of Breinigsville. His enthusiasm helped change the students, tentative at first, as several had never worked with tools, to a more confident group by Friday afternoon. A half-day of rain didn’t slow the work of the class, who according to Dr. Jane Flood, the Muhlenberg professor coordinating the workshop, participated with the highest energy level seen in her 20 years at the school.

The economics of solar power was covered by Dr. Vera Cole, whose book encompassing the regulatory and financial aspects of photovoltaics in Pennsylvania will be published this summer with MAREA support. 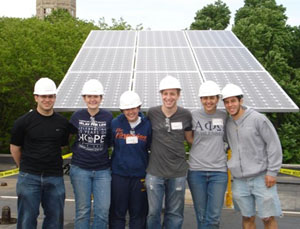 Two nine-panel arrays, mounted on the roof of Seegers Union, provide the electricity that feeds two SMA inverters. A complete data collection kit was installed with the 3.2 kw system to provide opportunities for research projects and ongoing analysis.

The project was funded through Muhlenberg College and a $15,000 Solar Scholars grant from the Sustainable Energy Fund, an Allentown nonprofit that funds solar projects for Pennsylvania colleges and universities. 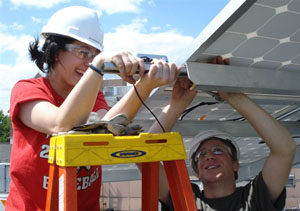 As said in the workshop evaluations, “Installing the solar panels ourselves was definitely the highlight of the course—I looked forward to going on the roof everyday.”

And, “I LOVED the course; end of story!”

Back to the top